Short: Maybe a Gnome shell and macOS Expose like dashboard for Xfce

Longer: xfdashboard provides a GNOME shell dashboard and macOS Mission Control (Exposé and Spaces) like interface for use with the Xfce desktop. It can be configured to run with any keyboard shortcut and when executed provides an overview of applications currently open enabling the user to switch between different applications. The search feature works like Xfce's app finder which makes it convenient to search for and start applications. 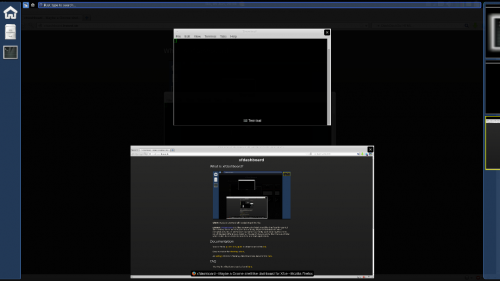 … and the dependencies of these libraries of course ;)

The following libraries are semi-optional:

The following libraries are optional and configurable:

On debian based distros, all requirements are installed with:

The latest development version is hosted on Xfce Git. You can browse it using the web interface at the following URL:https://gitlab.xfce.org/apps/xfdashboard

Here you find the documentation for theming and settings of the latest development version.

For older development releases or stable releases look at the release archive.
http://git.xfce.org/apps/xfdashboard/

Back to main Xfce documentation page